YOU ARE HERE >> AmazingRibs » Ratings & Reviews » Ratings Reviews And Buying Guides » BBQ Tools Toys And Accessory Reviews » Books And Magazines » Catching Fire, How Cooking Made Us Human by Richard Wrangham

Catching Fire, How Cooking Made Us Human by Richard Wrangham 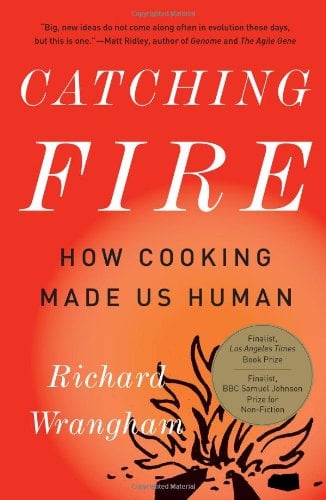 An interesting read on human evolution and cooking with fire.

In the book “Catching Fire, How Cooking Made Us Human” (Basic Books, 2010), author Richard Wrangham describes in detail how cooking changes the chemistry of food and how that made it easier for proto humans to chew, digest, and extract energy and nutrients, and how that impacted their body shape, lips, jaws, teeth, intestines, and most importantly, brain size, allowing the emergence of Homo erectus, our direct ancestors. He also explains how cooking was largely responsible for the differentiating of male and female roles in early societies.

Wrangham is a professor of biological anthropology at Harvard, Curator of Primate Behaviorial Biology at the Peabody Museum, and Director of the Kibale Chimpanzee Project in Uganda. He does a remarkable job of telling the fascinating tale, and backing it up with ample research data, of how human evolution was drastically influenced by the capture of fire and the invention of cooking.

Despite his impressive credentials, there is nothing academic or textbook about this fascinating read. Witness: “Humans are adapted to eating cooked food in the same essential way as cows ar adapted to eating grass, or fleas to sucking blood, or any other animal to its signature diet. We humans are the cooking apes, the creatures of the flame.”

Without being argumentative, Wrangham uses data from the raw food movement and related research to build an irrefutable case for the role of meat in past and present diets.

Wrangham has added a rich new layer to the story of human evolution, an ah ha moment, and a particularly satisfying insight for those of us who love to hang out at the grill.

This innovative lucid account demonstrates that, not only did humans create cuisine, cuisine created humans.