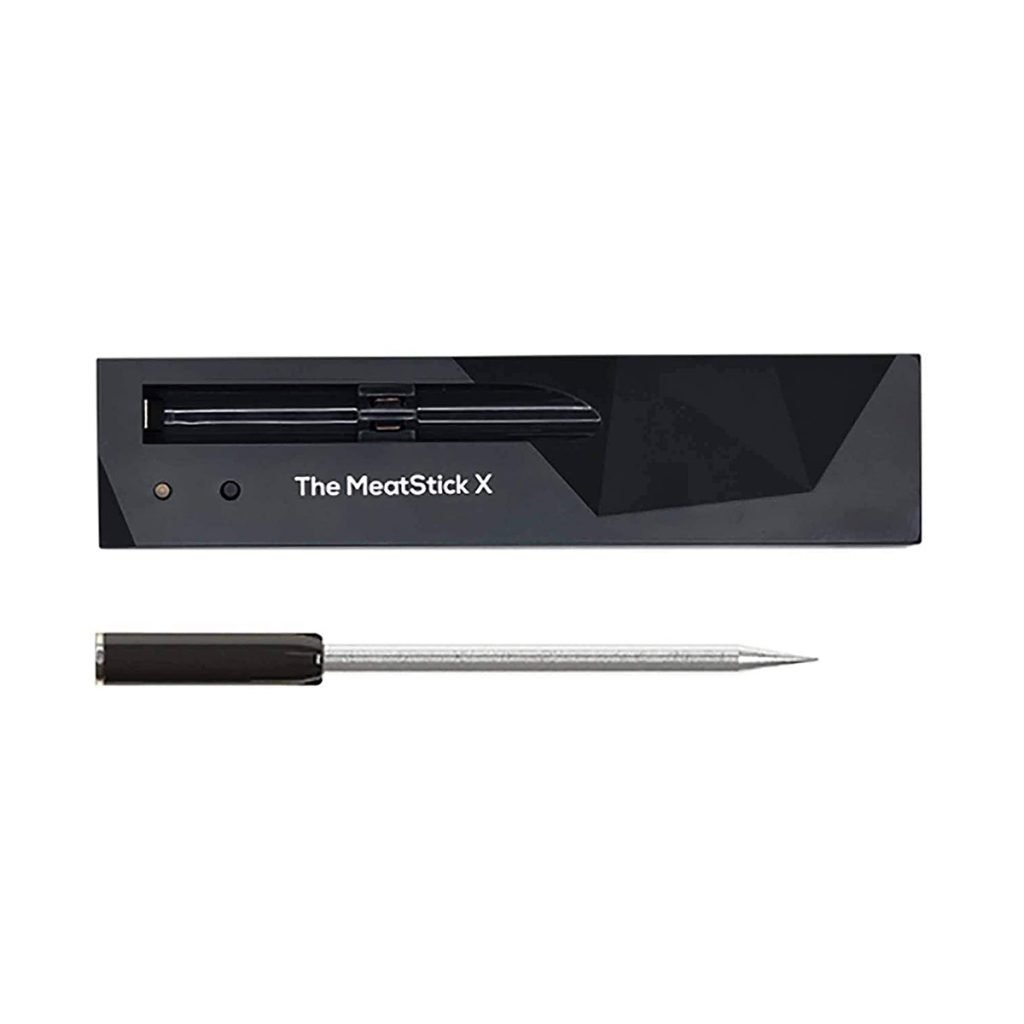 The MeatStick X is a new addition to the MeatStick family of wireless probe thermometers. Instead of a probe connected to a transmitter or readout via a flexible cable, the MeatStick devices connect to a smart phone via a Bluetooth connection. The probe resembles a sharpened pencil, and it contains a rechargeable battery, temperature sensors, and the electronics to send the data to a receiver.

The probe on the MeatStick X is charged by inserting it into a base that contains two AA batteries that are not included. This charger doubles as a relay that receives signals from the probe and forwards them to the smart phone. This allows the weak signals produced by the probe to be amplified to increase the range between the probe and the phone. The user is advised to keep the charger/relay within about six feet (2m) of the probe; communication range in this configuration is claimed to be 260′ (80m). Aside from a tiny battery icon in the app, there isn’t any way to determine the charge level of the probe or the battery status in the charger/relay. The manufacturer claims that a fully-charged probe will operate for 24+ hours. The user is advised to charge MeatStick X for a minimum of four hours prior to first use; the time required to fully charge the probe is not given in the instructions.

The probe has two temperature sensors, one in the tip for the food and another in the handle that measures the ambient temperature inside the cooker. The instructions say that the probe must be inserted into the food all the way to the handle. This can be a problem if the shape of the meat is such that the tip is not in the center of the food. Leaving the probe partially inserted could allow the shaft of the probe to be exposed to temperatures that might damage it. According to the manufacturer, the probe shaft should not be subjected to temperatures above 212°F (100°C), and the handle should not be subjected to temps above 572°F (300°C). While the latter temp might not be a problem when smoking or roasting, I’m concerned that a flare-up while grilling could subject the handle to damaging temperatures. The probe is dishwasher, sous vide, and deep-fryer safe, according to the manufacturer.

Like what you’re reading? Click here to get Smoke Signals, our free monthly email that tells you about new articles, science, recipes, product reviews, mythbusting, and more. Be Amazing!

To test the accuracy of the probe’s ambient temperature sensor, I wrapped the shaft of the probe in a thick cotton sock that had been soaked in water. I squeezed out just enough water so that the sock did not drip. Using a wired thermometer of known accuracy as a reference, I put its grate probe next to the MeatStick X handle on the center rack of an oven and adjusted the temperature to approximately 225°F. I waited until all the readings on both thermometers stabilized and took the readings. The reference thermometer read 238° while the MeatStick X read 221°, a difference of 17°. I repeated the test at 323° at which point the MeatStick X read 305°, a difference of 18°.

To test the food sensor, I prepared an ice water bath, a bath of 130°F in an Instant Pot, and a large pot of simmering water. The MeatStick X read 52°F in the ice water; 130° in the Instant Pot, and 185° in the simmering water that was measured by a thermometer of known accuracy to be 200°. The ice water differential was 20° but this isn’t really a meaningful test as nobody works with frozen food. The Instant Pot bath at 130° gave a reading on the MeatStick of 130°, spot on. The water simmering at 200° yielded a temperature from the MeatStick X of 185°. Conclusion: if you’re cooking a roast to medium-rare, you’ll get an accurate measurement. If you’re cooking a brisket to 203°, you’ll be undercooking your food by about 15°.

The app walks the user through a series of settings that control the cook. You can select the type of cooking and type of food, and the doneness level (medium-rare translates to 135°F, about right) and the oven temperature – 325° for the prime rib selection I chose. You can select the size of the roast as well. The app gives you an approximate cooking time, 1:30 in this case. You can then set alert temperatures, including an Early Warning option (5° below the target temp). You then start the cook. You can monitor both temps and watch the time prediction, as well as a temp vs. time graph. After a few minutes, I put my phone into airplane mode to cut the connection with the probe. I expected some sort of notification of loss of signal, but nothing happened for 10 minutes. Finally, I got a message that the connection was lost. However, the cook status display didn’t flag this condition. So, if you missed the aural notification, you could think that all was well. This is a problem. I stuck the probe into a dish of hot water. When I took the phone out of airplane mode, the display updated, but it faked the missing data, showing a gradual rise in temp instead of the abrupt change that actually occurred. It did not indicate that a period of time without communication had elapsed.

I’d rate the app as straightforward and easy to use but lacking the essential communications status.

Warranty is one year. If the user has a problem, there is an e-mail address. I couldn’t find a phone number for customer support, although it might be found on their website whose URL is given.

Overall, this is a disappointing product. Temperature accuracy is poor. I worry about the probe’s immunity from damage in the real world of cooking. Inadequate notification of communication loss is a fatal flaw. The printed instructions that come with the product are inadequate, but the app does walk the user through the important steps. There are still problems with this completely wireless technology. I cannot recommend this thermometer.