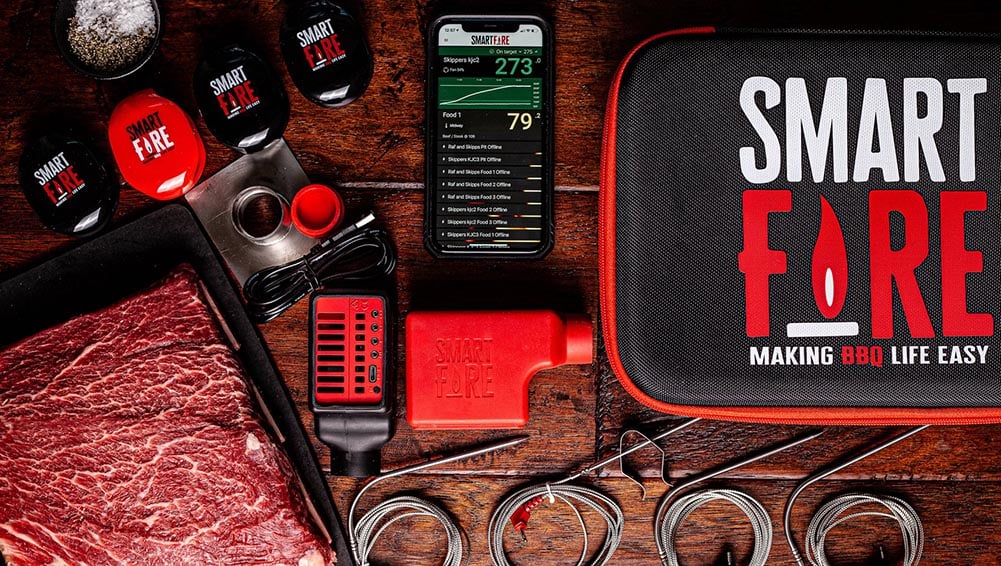 The SmartFire Pro 5 BBQ Controller is an integrated thermometer and thermostatically controlled fan that communicates with a smart phone via Bluetooth and Wi-Fi, allowing the user to monitor and control a charcoal-fired cooker while monitoring up to three food temperatures. The controller can mate with a wide variety of cookers using custom mounting adapters, and works with both Apple and Android devices. This new unit has a higher capacity fan and better protection from the elements than the earlier product.

This test was conducted using an 18.5″ Weber Smokey Mountain cooker. The factory recommended moving the charcoal ring to the opposite side of the cooker from the fan, and lighting the coals farthest from the fan. I followed those instructions, lighting about 6-8 coals with a propane torch.

The unit is powered by an included USB cable, but you must supply the charger itself, something that should not be a problem for most users. There is no internal battery, so you’ll need either AC or an external battery pack that supports USB voltages.

There is no display on the unit – all status info is provided via a smart phone or a web browser. The only indicator is a small multi-colored LED that shows connection status. Using the free app, a Bluetooth connection allows the user to configure the unit to communicate with your Wi-Fi router which in turn connects it to a dedicated server in the cloud. The smart phone then communicates with the cloud server, permitting operation anywhere an internet connection exists. The app can control multiple cookers simultaneously. Each unit has four inputs: a probe that monitors the cooker temperature and three probes for food temps.

Four temperature probes come with the unit, one has a rounded tip and a grill clip, the other three are pointed for insertion into food. The cables are stainless steel braids that are 60″ (1.52m) long, long enough for just about any cooker. Four reels are provided to store the probes when not in use. The whole kit comes in an attractive zippered case.

The temperature of each probe is displayed separately, with a plot of temperature vs. time conspicuously shown. You can set alarms for each probe individually. The cooker probe supports a lower and an upper alarm threshold to warn the user of fuel depletion or out of limits operation. The food probes can be set to trigger temperature alarms based on pre-programmed limits or custom values. When an alarm threshold is reached, a user-selectable audible alarm will sound. The control unit is also capable of connecting wirelessly with up to two Meater probes, but these probes cannot act as the Pit thermometer controlling the fan.

The basic setup screen allows you to select the cooker type, name your device, select the alarm sound, and choose a screen background. There is an advanced settings screen that allows the user to make under-the-hood adjustments to the controller’s behavior, including the open-lid detection and the PID parameters. The average user probably won’t need or want to play with these settings.

As you can see, temperature control is excellent. The sharp drop and rise around 5:15 pm show where I opened the lid and sauced the food. I used this test session to smoke some baby back ribs – my guests approved!

All things considered, this unit performs well. Temperature accuracy is excellent, so is temperature control. Navigating through the app was a little confusing at first, but I got used to it. The housing for the fan and electronics is protected by a silicone cover that also provides protection from rain. The adapter for the Weber requires some modifications to the cooker vents, which wasn’t necessary with the now-unavailable “cake tin” adapter. I’d like to see a bit more flexibility in programming temperature profiles; perhaps that will come with future firmware or app versions.

Customer support is lacking from many manufacturers these days, but the people at SmartFire are an exception.

Contact info for customer support is found in the instructions, on the website and in the app. Warranty is one year for the electronics and three months for the probes.

I would recommend this thermostatic controller. It’s competitively priced, it’s well made, and it performs well. What’s not to like?