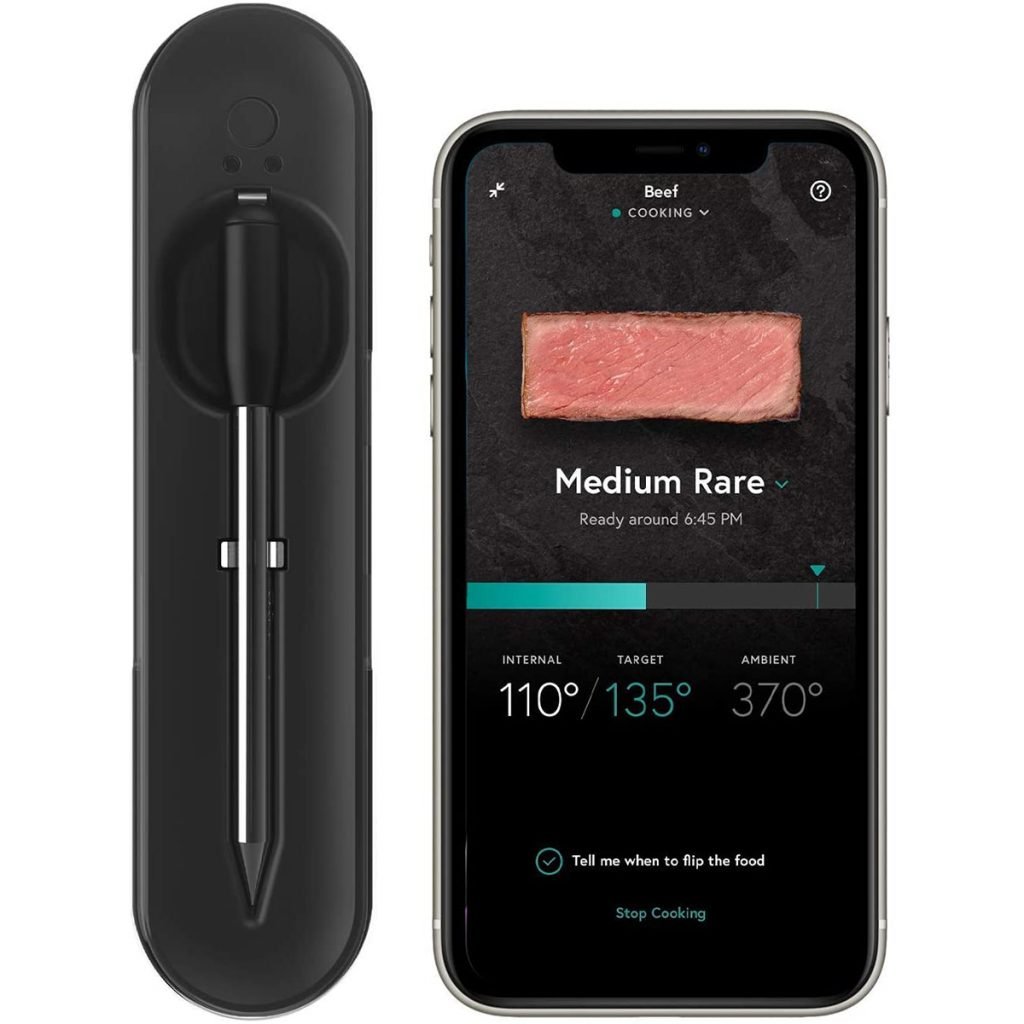 The Yummly Wireless Meat Thermometer is a new addition to the growing array of wireless probe thermometers on the market. Instead of a probe connected to a transmitter or readout via a flexible cable, these so-called smart thermometers consist of a stand-alone probe connected to a smart phone via Bluetooth. The probe resembles a sharpened pencil and contains a rechargeable battery, temperature sensors, and the electronics to send the data to a receiver.

The Yummly thermometer docking station is available in black or white, with the white version priced $40 less than the black version. Go figure!

To charge the probe, the user inserts it into a docking station that contains two AAA batteries that are included. This unit doubles as a relay that receives signals from the probe and forwards them to the smart phone. This allows the weak signals produced by the probe to be amplified to increase the range between the probe and the phone, given as 150′ (45m) by the manufacturer. There is a Bluetooth connection status light on the docking station. The manufacturer claims that a fully-charged probe will operate for 25 hours. The user is advised to charge the probe for a minimum of 30 minutes prior to first use; the time required to fully charge a probe is not given in the instructions.

The probe has two temperature sensors, one in the tip for the food and another in the handle that measures the ambient temperature inside the cooker. The instructions say that the probe must be inserted into the food all the way to the handle. This can be a problem if the shape of the meat is such that the tip is not in the center of the food. Leaving the probe partially inserted could allow the shaft of the probe to be exposed to temperatures that might damage it. The probe shaft should not be subjected to temperatures above 210°F (99°C), and the handle should not be subjected to temps above 572°F (300°C). While this might not be a problem if smoking or roasting, I’m concerned that a flare-up while grilling could subject the handle to damaging temperatures.

To test the accuracy of the Yummly thermometer’s ambient temperature sensor, I wrapped the shaft of the probe in a thick cotton sock that had been soaked in water. I squeezed out just enough water so that the sock did not drip. Using a wired thermometer of known accuracy as a reference, I put its grate probe next to the Yummly handle on the center rack of an oven and adjusted the temperature to approximately 225°F. I waited until all the readings on both thermometers stabilized, and then recorded the readings. The reference thermometer read 226°F while the Yummly read 274°, a difference of 48°. I repeated the test at 324° at which point the Yummly read 355°, a difference of 31°.

To test the food sensor, I prepared an ice water bath, another bath of 131°F in an Instant Pot, and a large pot of simmering water. The Yummly read 36°F in the ice water; 131° in the Instant Pot, and 182° in the simmering water that was measured by a thermometer of known accuracy to be 195°. The ice water differential was 4° but this isn’t really a meaningful test as nobody works with frozen food. The Instant Pot bath at 131° was read by the Yummly thermometer at 131°, spot on. The water simmering at 195° yielded a temperature from the Yummly of 182°. Conclusion: if you’re cooking a roast to medium-rare or another relatively low internal temp, you’ll get an accurate measurement. If you’re cooking a brisket to a higher internal temp of 203°, you’ll be undercooking your food by about 13°.

Up your game: Join our Pitmaster Club. Try it out for free for 30 days. No credit card needed. No spam. Click here to Be Amazing!

The app, both Apple and Android versions, walks the user through a series of settings that control the cook. You can select the type of cooking and type of food, and the doneness level (medium-rare translates to 135°F, about right). The app calculates an approximate cooking time. You can then set alert temperatures to warn you it’s time to turn over the food. You then start the cook. You can monitor both temps and watch the time prediction, as well as a temp vs. time graph. After a few minutes, I put my phone into airplane mode to cut the connection with the probe. In a matter of seconds, I got a message that the connection was lost, with both visual and aural annunciations. Then I stuck the probe into a dish of hot water. When I took the phone out of airplane mode, the display updated, showing the food temp accurately as 125°. Unfortunately, the ambient temperature displayed as 280° when it was actually room temperature. The app has two small icons that provide info on the charge level of the probe and the docking station.

I’d rate the app as straightforward and easy to use. It also includes a lot of extraneous instructive material and videos for marketing purposes, something I could do without.

Warranty is one year. If the user has a problem, there is an e-mail address and a phone number for customer support on the instruction sheet. There is also a website URL for more information. The barely adequate printed instructions are in English and Spanish. The app is the real source of instruction in the thermometer’s use.

Overall, temperature accuracy is poor. I worry about the probe’s immunity from damage in the real world of cooking. The printed instructions that come with the product are subpar, but the app does walk the user through the important steps. There are still significant problems with this completely wireless technology. I cannot recommend this thermometer.