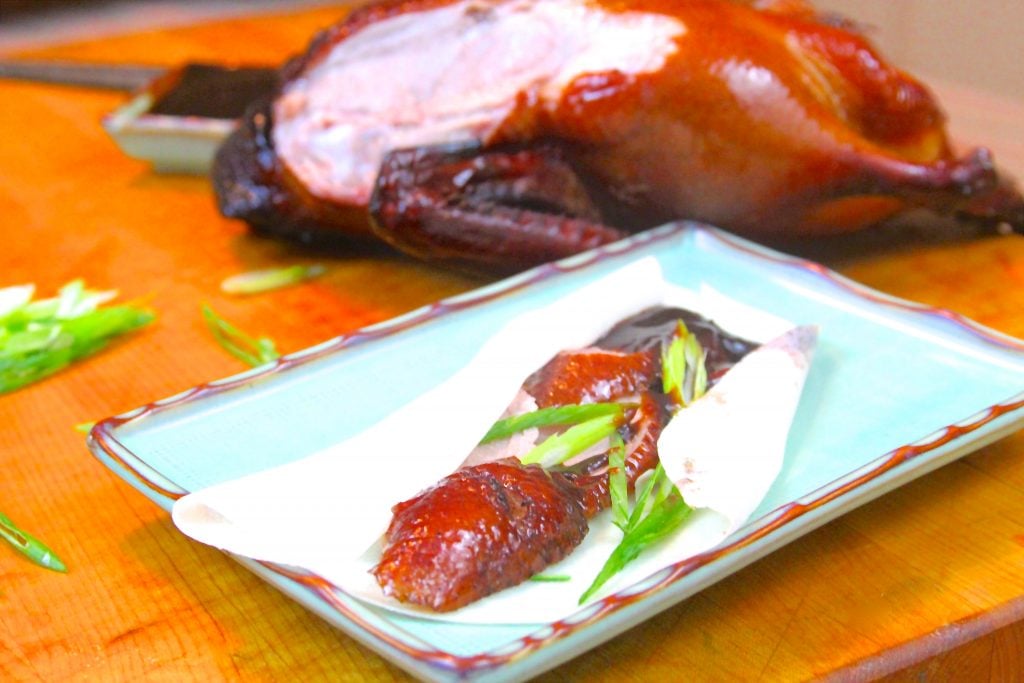 If I had to describe this dish in one word it would be “deculent,” a perfect marriage of decadent and succulent. Or is that “duck-ulent”?

Reportedly created during the Ming Dynasty, roasted Peking duck is a cornerstone of Beijing cuisine and is considered a national dish of China.

For me, my love affair with Peking duck began approximately 20 years ago during a business dinner at one of New York’s finest Chinese restaurants. Arriving at the table whole, the duck was a rich mahogany color with perfectly crisped skin that immediately begged to be devoured.

The waiter sliced the duck right before our eyes, inviting us to wrap the tender meat and crisp skin in a thin Mandarin pancake along with Hoisin sauce and sliced green onions. The first bite brought a symphony of flavors perfectly melding rich duck with tangy sauce, crunchy skin, and zesty green onion.

Fast forward to my first attempt at replicating the dish at home. After roasting the whole duck for several hours on the grill, the skin was perfectly browned and the meat mouthwateringly juicy. When cut in to, however, the skin was still flabby and full of fat. Intent on perfecting the grilled Peking duck dish, I spent several hours researching a variety of tips for obtaining the cracklingly crisp skin that is the hallmark of great Peking duck. Eventually, I settled on a series of techniques that, although time consuming, are well worth the effort.

You begin by gently working your fingers under the skin to separate it from the flesh. Next, blanch the duck with hot water in order to tighten the skin and begin rendering the thick layer of fat beneath it. After blanching, pierce the duck skin all over to help drain off the fat as the duck cooks. Then you glaze the skin with a soy, vinegar, and honey mixture for flavor and extra crispness (the honey helps with crisping). Finally, you dust the duck with a combination of baking powder and salt to help remove excess moisture while the duck air-dries for several hours before roasting. 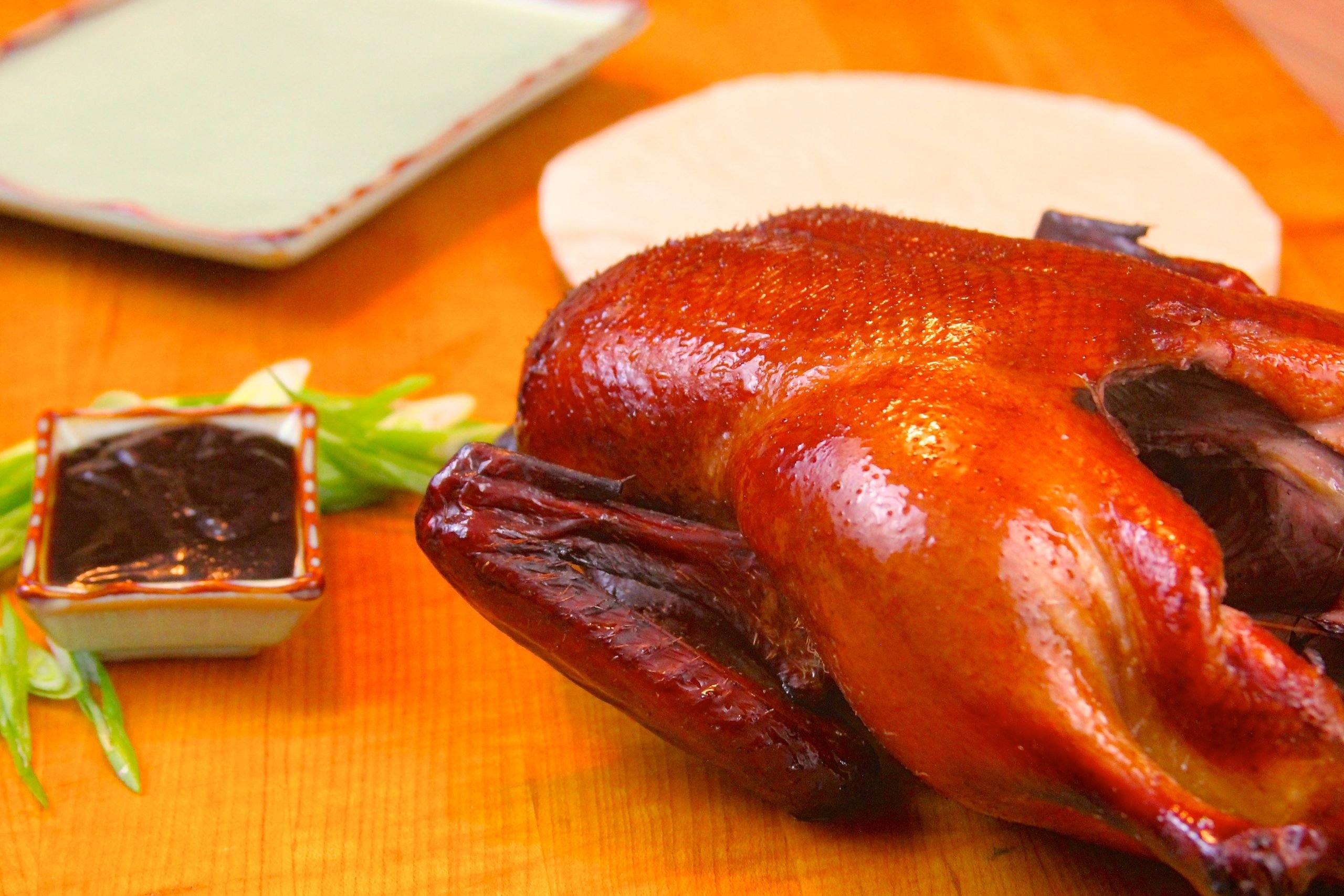 Tried this recipe?Tell others what you thought of it and give it a star rating below.
3.63 from 74 votes
Print Recipe Pin Recipe
Roasted Peking duck is a cornerstone of Beijing cuisine and is considered a national dish of China.

Serve with: hot tea or a Chinese beer such as Tsingtao.

US Customary - Metric
Notes:
About the rice vinegar. This is less strong, about 4% acetic acid, than most commercial white vinegars or even cider vinegar, which are often 6% or more. Most good groceries sell it as either plain or seasoned. Get the plain. If you must use white vinegar or cider vinegar, add a couple of tablespoons more water. About the salt. Remember, kosher salt is half the concentration of table salt so if you use table salt, use half as much. Click here to read more about salt and how it works.  About the baking powder. Seasoning duck with a combination of baking powder and salt is a technique inspired by J. Kenji Lopez-Alt of SeriousEats.com. The mixture not only helps draw additional moisture from the duck but also raises the pH level, thereby ensuring evenly browned and crispy skin during the roasting process. About the Mandarin pancakes. Sometimes labeled moo shu pancakes or Chinese pancakes, these small, thin pancakes are available at most international grocery stores. Alternatively, there are countless recipes for home made pancakes including this one from Nigella.com. About the Hoisin sauce. This thick sweet and salty sauce is a common glaze and dipping sauce in Chinese cuisine. It can be found in the international section of most major grocery stores.
Metric conversion:

The perils of duck hunting are great — especially for the duck.

Create perfectly crisp and juicy peking duck on the grill.