The Ultimate Guide To The Best Coolers On The Market 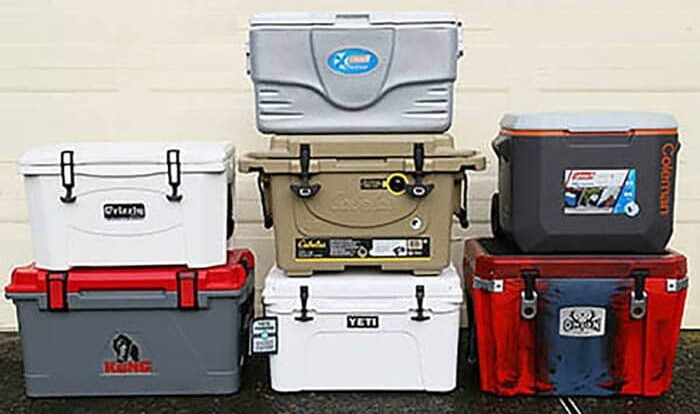 If you’re in the market for the perfect cooler then this is the guide for you.

No one likes soggy food. Fortunately, some of today’s high-tech coolers can keep your food on ice (and not in water) for well over a week!

Click Here To Search Our Reviews And Ratings Of Tools, Toys, And Accessories

To judge the relative strengths and weaknesses of various brands of so-called “super coolers,” I invited the most popular cooler companies to participate in some extensive tests of their products. Six took me up on the challenge: Cabela’s, Grizzly, Kong, Orion and Yeti. I tested a less expensive model from Coleman for a total of six coolers overall.

The first thing I did was load each cooler with 32 pounds of cubed ice. Then I closed the lids, and checked them once a day at 9 a.m. for the first five days, then twice (9 a.m. and 9 p.m.) for the following days. They were all sitting outside my garage in the shade. Temperatures averaged from 41˚F (overnight) to 84˚F over the two weeks tested.

I then timed how long it took to drain the melted ice water, by opening the lids, and opening or completely removing the spigots (when I could), and finally measuring the amount of water that didn’t drain.

Following that, I dried out the coolers, poured a 5-gallon bucket of hot water into each one, and sealed them for 20 minutes. Meanwhile I took seven 10-pound hams, which had all been heated to an internal temperature of 185˚F (+ or – 4˚F), and double wrapped them in heavy duty foil. I then placed one wrapped ham in each cooler, noted the time, and sealed the coolers.

For the next test, I filled each cooler with water and tipped them on their sides gently, to measure leakage, then turned them over with the lids down. As the Coleman didn’t have sealing latches it completely failed this test, as the lids popped open instantly, sending out a torrent of water.

To test durability, I filled each cooler halfway with water, added 6 filled water bottles and hired two neighborhood boys to push the coolers off the back of a pickup truck onto a concrete driveway. (They couldn’t believe they would be paid for such a fun chore!) Field & Stream magazine did a similar test, only they drove their pickup at 45 mph while dumping the coolers. I merely duplicated the problem of the cooler slipping out of a pickup truck, albeit it a slower speed.

Finally I tried to bend the lids, handles and any other moving parts as much as I could. I can report that all of the coolers handled this abuse very well.

Below, I list some of the included gadgets, thingamajigs and extras for each cooler, not because they particularly influenced my review but merely to let you know what each manufacturer thinks is important to add on. I feel that most of these thingamajigs are unnecessary.

How they are made

All of the coolers I tested, except the two Colemans, are made by a process called rotational molding, or rotomolding, which means they are all one-piece construction, so every part of the cooler has equally thick walls with no imperfections. Generally, these rotomolded coolers can withstand any type of abuse, including being handled and mauled by grizzly bears (no kidding). Lastly, all the coolers that I tested claim to be BPA-free.

If you're in the market for a heavy duty cooler, this might be the one for you. The Pelican Elite 50 Quart Cooler features 360 degree freezer-grade gaskets, 2 inch thick polyurethane insulators in the lid, and more. The Pelican is also the only cooler capable of preventing a 450-pound Grizzly bear from getting in.

The rated and reviewed Grizzly 40 quart cooler is a great option for anyone seeking a well made heavy duty cooler. It features heavy duty handles, has molded lock eyelets, non-slip and non-marking rubber feet so the unit won’t slide, multiple tie-down points, a large leak-proof drain spigot, and a molded-in hinge.

The extensively tested Xtreme Wheeled 50-Quart Cooler is perfect for most weekend or 1-2 day cooling needs. At one-quarter the price of our other reviewed coolers, the cost-to-performance ratio is more than adequate for many needs. With no latches and only marginal hinges, this is not a sturdy cooler.

Built to last, the Yeti cooler is a favorite among our cooler review team and countless consumers. Yeti's Tundra model features T-Rex lid latches which fit into a ball and joint type of closure, tie-down slots molded into the body of the coolers for securing the cooler, and a patented Coldlock freezer-quality gasket.

With the most striking appearance of any cooler we know, Orion 45 has seven different cooler designs, each of which is literally a work of art. Thoroughly tested, looks from the outside,the beauty of Orion coolers is matched by outstanding performance and attention to detail on every part of the cooler.