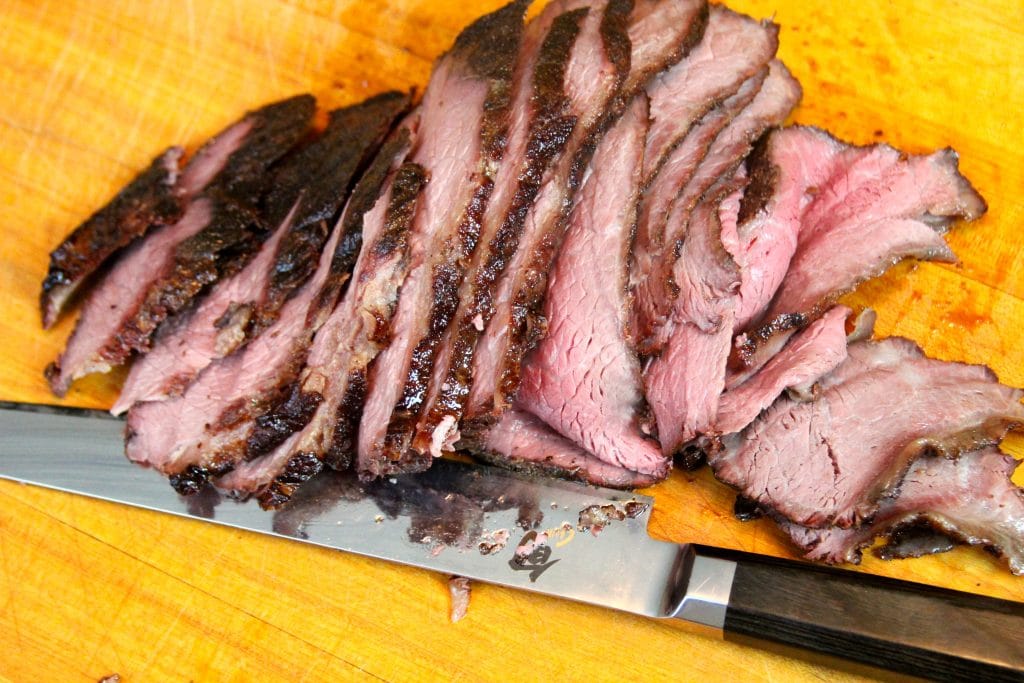 Sous-vide-que makes an extremely lean cut of beef mouthwateringly tender by combining the sous vide method with the grill.

If money were no object then I’d be living on prime, dry aged ribeyes.

Until I hit the lottery, I’ll keep making economical cuts of beef taste just as delicious. That’s exactly what I do with bottom round roast. Frequently found on sale for half the price of ribeye, this large hunk of beef is perfect for a cost conscious family. But how do you take an extremely lean cut and turn it into something moist and delicious like that beloved ribeye?

The answer lies in sous-vide-que, a preparation method that starts by cooking food for several hours in a low temperature water bath (“sous vide”) before finishing it on the smoker or grill for a traditional barbecue element. With this method, an otherwise tough roast stays tender and juicy. A brief stay on the grill adds the seductive flavors of smoke and browning, giving you an inexpensive, flavor packed main course.

The road to a perfect sous-vide-que bottom round roast recipe begins by sous viding it for 30 hours at 131°F (a time and temperature derived from the suggested starting points in our sous vide que time and temperature guide here). Yes, 30 hours. But you don’t do a single thing other than let it cook unattended the entire time! After the low and slow water bath, you cool down the roast in ice water to stop the cooking, then let it soak up some smoke flavor on the grill. Or you can refrigerate the roast for up to 2 days before grilling it. The ultimate make ahead meal!

It doesn’t take much effort to transform an inexpensive roast into a mouthwateringly delicious meal for six people. All it needs is time, while you go do something else!

Tried this recipe?Tell others what you thought of it and give it a star rating below.
4.43 from 49 votes
Print Recipe Pin Recipe
Sous vide is a preparation method that starts by cooking food for several hours in a low temperature water bath before finishing it on the smoker or grill for a traditional barbecue element.

Serve with: a bold red wine.

About the salt. Remember, kosher salt is half the concentration of table salt so if you use table salt, use half as much. Click here to read more about salt and how it works. For this recipe, you want to use 1/2 teaspoon Morton coarse kosher salt per pound of meat.

There is no sincerer love than the love of food.


The flat top does the burgers and the fryer does the fries. Use the griddle for bacon, eggs, and home fries. Or pancakes, fajitas, grilled cheese, you name it. Why stink up the house deep frying and spatter all over? Do your fried chicken and calamari outside. Blackstone’s Rangetop Combo With Deep Fryer does it all!

If you’re using oven mitts at the grill, it’s time to trade up. Say hello to these suede welder’s gloves. They’re heat resistant enough to handle hot grill grates, and flexible enough to handle tongs. The extra long sleeves even let you reach deep into the firebox to move hot logs without getting burned. Our Fave.